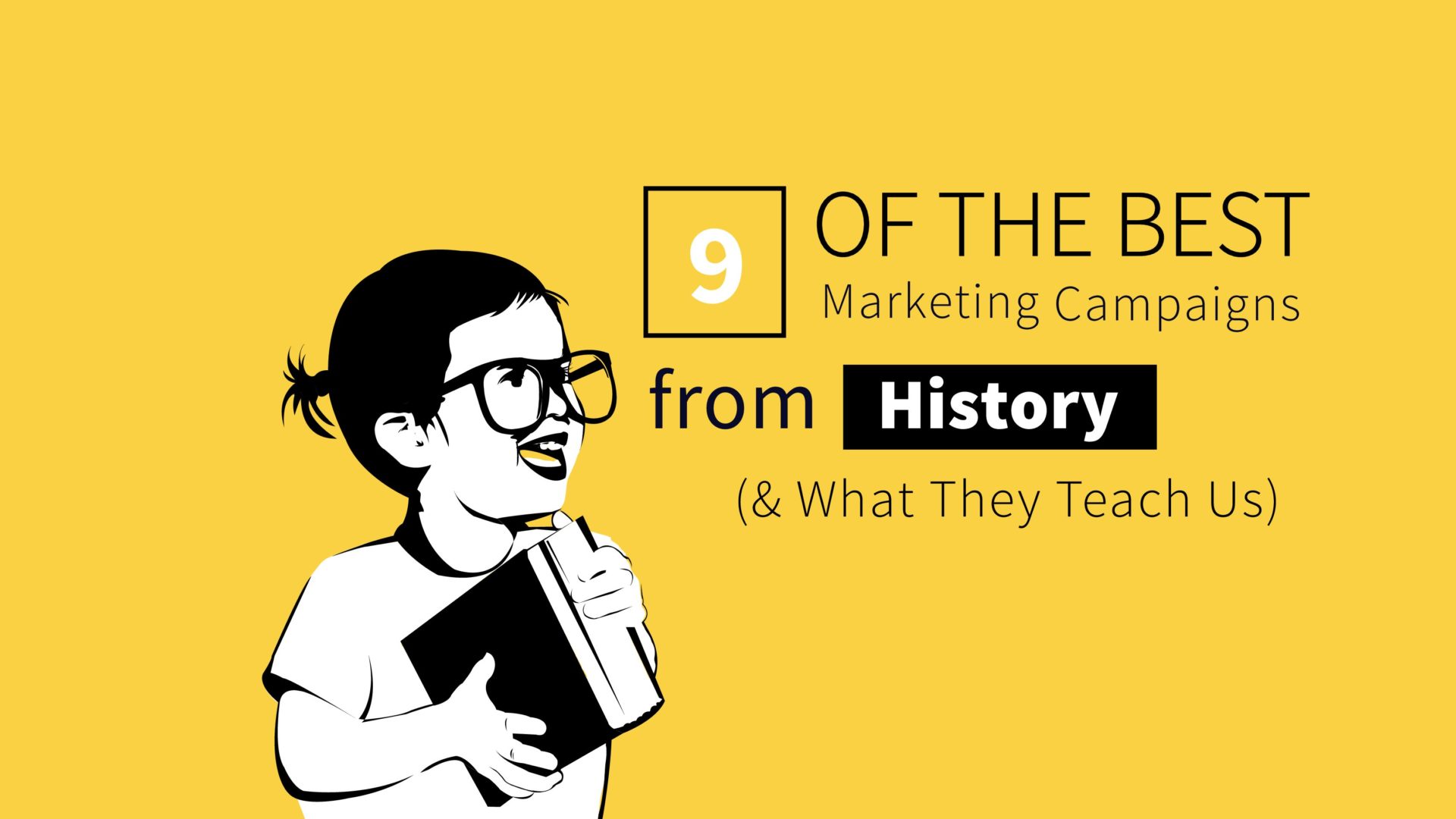 Despite the constant evolution of marketing and advertising trends, certain campaigns manage to maintain their luster. In fact, ordinary products like milk and soap have left a lasting imprint on our culture as a whole – and it’s all thanks to the viral messaging that carried them. To guide and inspire your branding efforts, here’s what you can learn from 9 of the best marketing campaigns in history that have withstood the test of time.

Got Milk is easily one of the most successful slogans of the modern era. But what made this seemingly simple tagline so irresistible?

One of its strengths is that it added an element of intrigue and interest to something inherently basic. In fact, people had been drinking milk for centuries when the campaign first ran. Yet, the campaign posed a question that made people literally stop and consider: did they have milk in the fridge? If not – they’d better go get some.

Another way the Got Milk campaign succeeded at making milk cool was by teaming up with the most popular celebrities of the era – teens like Britney Spears, Jonathan Taylor Thomas and Buffy the vampire slayer all posed with milk moustaches during the campaign’s peak.

What Got Milk teaches us

These ads were showing people that famous people drink milk, but they also featured copy that tied into the person’s music, tv show or other form of fame in a way that felt approachable. The questioning nature of the messaging also made the campaign actionable, and it shows that marketers can drive demand for any product, no matter how basic.

It’s rare that a safety video goes viral, but when one does – you know it’s good. Metro Trains’ Dumb Ways to Die is successful on many fronts, but at the core of its achievements is its ability to make grave topics both funny and memorable. No one likes to talk about dying, and imaging a train striking you quickly conjures images of gore, pain and suffering. Metro Trains turned to cartoons to make this topic approachable and neutral. And while the characters in the film don’t look like humans, they exhibit emotions and decisions that help people, and children in particular, relate to them. It also shows the importance of roping the reader in – in this case with catchy music and a great storyline – capturing audiences before a call to action presents itself.

What Metro Trains teaches us

For marketers trying to sell a lesson or idea that doesn’t feel traditionally interesting, Dumb Ways to Die is the ideal inspiration. It shows how humor and lightheartedness can be influential, even when the topic is serious.

In a world where airbrushing and photoshop are all too common, Dove’s Real Beauty Campaign was a breath of fresh air. (Later iterations of this campaign received backlash, but we’ll focus on the primary years). This campaign is notable because, like milk, it was once associated with a basic, everyday product: soap.

Rather than changing their product, however, Dove changed the industry conversion that was happening around it. Perhaps the most successful aspect of this campaign included imagery featuring real women – not models – with varying skin tones and body types.

What Dove teaches us

Some people struggled to see the truth in Dove’s message, especially since the company is associated with products like men’s cologne and skin firming cream. Fortunately, this was something the team at Dove anticipated. To show that it was serious about its message, Dove created a fund for young boys and girls, which supported insightful discussions about women and beauty. The greatest lesson here is that, when possible, your marketing messages should be supported by real-world action.

On a fundamental level, the ice bucket challenge worked because it was simple. There was no question about what needed to be done or how you could participate. The other important factor at play was a clear, concise goal. Participating in the challenge helped raise money for a good cause, and it helped people make a feel-good, selfless act.

What the Ice Bucket Challenge teaches us

Another strategic aspect of the campaign was its sense of urgency. Urgency often works in marketing when it plays up ideas of scarcity, like products that are limited edition, for example. In this case, a 24 hour timeframe influenced nominated people to act fast. If they didn’t, they’d miss out on doing a good cause and fitting in with what their friends were doing. Marketers seeking to learn from this challenge should consider the power of scarcity and brevity.

First launched as a celebration of the 100-day countdown to the London Olympics, P&G’s “Thank You Mom” ad continues to drive brand awareness. The idea behind the ad was to show that behind every olympian, there is a proud and supportive mom. Although this campaign tied into an olympic theme, it’s overarching message rang true with moms everywhere. It succeeded at drawing attention to its particular target market, moms, by giving them a huge and public thank you for all that they do.

This transcended the boundaries of ordinary marketing by forgoing sales copy and product pitches all together. This was a bold move, but it was matched with imagery that was emotionally riveting. It also had the uncanny effect of appealing to nearly everyone. Aside from the moms whose heartstrings it pulled, the Thank You Mom campaign related to each member of its audience with a mom (i.e. everyone).

What P&G teaches us

Marketing that talks about human experiences can easily backfire, especially when it doesn’t feel authentic. However, this campaign shows how it can be done in a tasteful way that elicits emotional brand connections.

The Truth Initiative has its sights set on a lofty goal: to end youth tobacco use once and for all. In the digital age, where movies, television and social media showcase role models smoking – this has become particularly difficult. That’s why the Truth Campaign always focused directly on telling true stories about smoking.

Although the campaign has adapted over the years to cater to different teen generations, Legacy has always focused on the same conflict. By pitting consumers against the bad guys (big tobacco companies) Legacy removes itself from the equation. It serves only as a vehicle to educate and do what’s right – leaving the ultimate choice up to the consumer.

What Legacy teaches us

This strategy is a successful example of how real-word facts, statistics and comparisons can be used in marketing to support a stronger message. The campaign regularly positions innocent parties against big tobacco to show why its messages are deceitful. This shows that when using powerful messaging, you shouldn’t also tell the consumer what to do. Rather, leave them with the information they need to reconsider their daily actions.

Branded stunts are both bold and risky, but Red Bull’s Stratos stunt fueled consumer adrenaline in more ways than one. This stunt featured a 24-mile free fall from the edge of space. At the time, this was one of the most watched live stream of all time.

Aside from its shock factor, why did this campaign work? One reason is because it blurred the line between sports and branding. Stratos streamed on nearly 80 TV stations across 50 centuries, garnering anticipation and viewership similar to the likes of the super bowl or an olympic event. Tapping into this new market – people who love watching sports and keeping up with current events – earned Red Bull a new place on the world stage. Moreover, the jump itself simply pushed the boundaries of what people are capable of.

What Red Bull teaches us

For brands that want to tap into this kind of success, it’s worth considering Red Bull’s social media strategy. For starters, a number of hashtags were released throughout the day to draw attention to the upcoming event. It also capitalized on live streaming, which made the event accessible to everyone while garnering 2.6 million social media mentions from start to finish.

Similarly to Dove’s Real Beauty campaign, aerie REAL seeks to challenge standard perceptions of beauty. However, aerie’s campaign differs because it directly targets the millennial market. This is a generation that’s swimming in a world fueled by gorgeous, globetrotting influencers and Kardashian-era beauty standards, so a shift towards honest, natural beauty is greatly welcomed.

The aerie REAL campaign also benefited the company in a literal sense – it provides a more realistic depiction of what its clothing and lingerie might look like on a consumer. This makes its entire collection more approachable, because women don’t feel intimidated like they might by photoshopped models.. Rather, the women wearing the clothes feel more like a friend or sister, which helps buyers visualize themselves owning the product.

What Aerie teaches us

The biggest lesson brands can learn from this campaign is that understanding your customers pays off. Aerie knew that its target market, women in high school and college, is greatly influenced by the media’s interpretation of beauty. Challenging these standards in a way that boosts confidence and acceptance helped make the brand an ally to women and girls everywhere.

Want to know how a campaign can last for 25 years? Look no further than the Absolut bottle campaign. Amidst the saturated spirits market, this campaign helped elevate the Absolut brand to its own unique position.

The most innovative aspect of the campaign is its ability to meld vodka with art. Over 2,000 iterations of the Absolut bottle have appeared throughout the campaign’s history. These iterations have been imagined by artists, fashion designers, and the like. The production team went to great lengths to create each ad. They even created intricate mini versions of cities like Louisville and Atlanta to get the right shot.

What Absolut teaches us

The Absolut campaign defied the in-your-face marketing that so many advertisers were at the time relying on. Instead, it introduced a new fluid form of brand association. It asked viewers to look closer; left room for interpretation. It teaches brands to remember the importance of production

From nonprofit organizations to lingerie brands, this list shows that viral marketing is possible in any industry. Through strong customer understanding and aptly-timed campaigns, you too can emulate these successes.