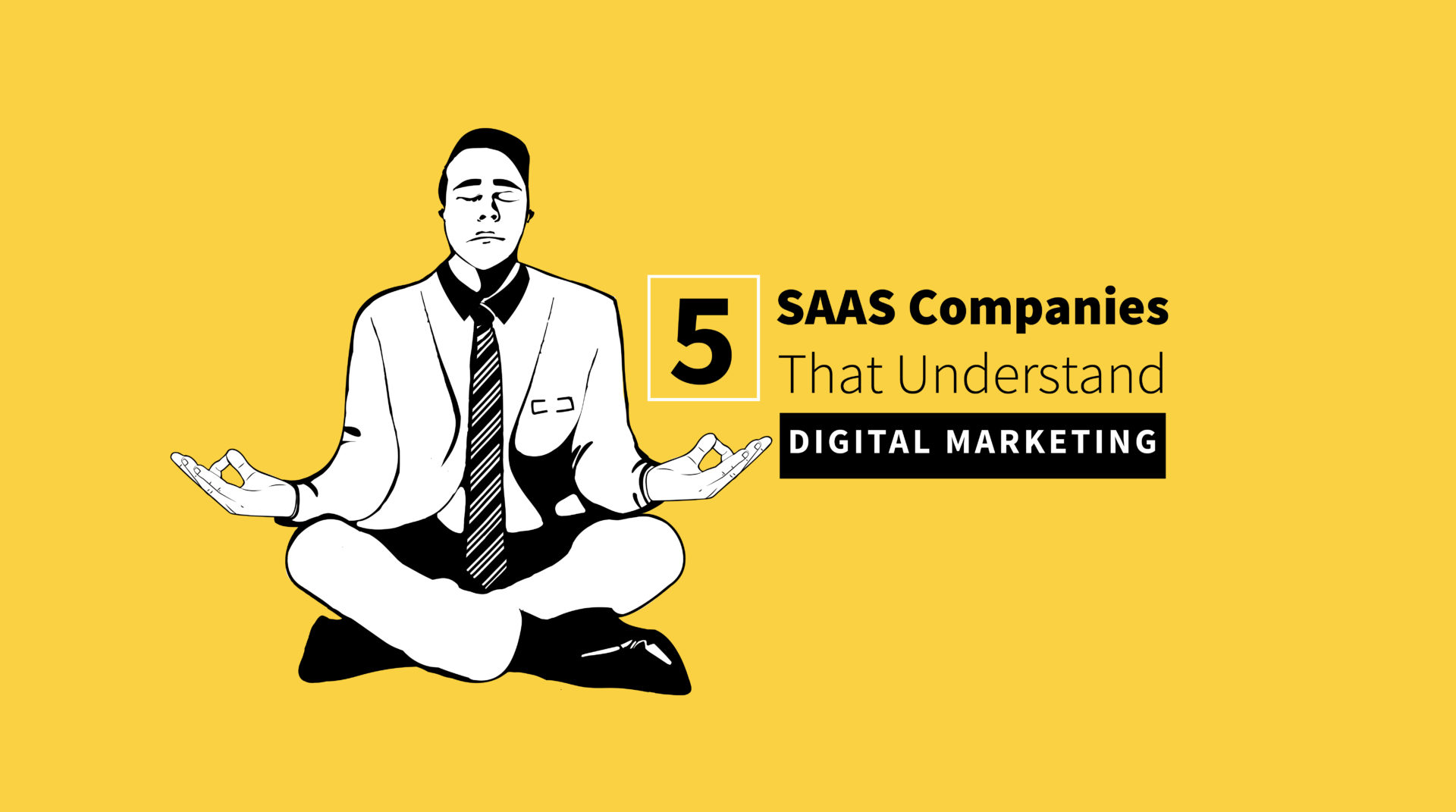 Marketing a SaaS product isn’t the easiest feat. Trying to define your (sometimes obscure) service within a 60 character limit with Google Ad is harder than it looks. But with the digital landscape constantly evolving, it is as important as ever. Some SaaS companies get it right. Others, not so much. Here are the best SaaS digital marketing campaigns

1. GitHub: “Build a platform to foster a community”

If you want to make a splash in social media marketing, do away with traditional channels altogether. Consider instead launching your own niche social media platform. That’s what Github did.

Github’s Facebook and LinkedIn accounts get a minimal amount of likes and shares on those platforms. However, in their case, it doesn’t really matter since its own social platform is the only one that really counts.

A recent content campaign for example, only managed a modest 89 Facebook reactions (no shares) and 97 LinkedIn likes (again, no shares). Yet, at the time of writing amassed had 4.1k views – and had convinced over 2,600 members to take part.

Github understands who their audience is, and what they’re interested in so they create engaging content (yes, contests are content too) that speak specifically to their core consumer. Understanding your audience, is one of the first steps every SaaS company should take before launching a campaign.

Positioning itself as a sort of Facebook for developers, GitHub has a 22 million-member community. Most of these members use its platforms to share and discuss code.

Following its decision to invest US$100 million in the company back in 2012, Andreessen Horowitz called the company “the de facto social network for programmers.” And that is the beauty of creating a platform for a unique need – if it’s workable, you will get a huge captive audience for your products just by virtue of hosting so many accounts.

In terms of non-social media digital marketing, GitHub’s campaigns have obviously paid dividends. It now has its own brand value, and the GitHub name is now becoming highly searchable. Per Alexa, almost 35 percent of visits to the GitHub site came from search engines, up from under 20 percent at the start of the year.

GitHub solutions are also getting mentioned as suggested tools on major Chinese media sites. These include Sina.com, one of the biggest online media portals in the Middle Kingdom, as well as Baidu’s tech blog.

Part of the reason for this is GitHub’s online reputation. Campaigns are particular GitHub strong point – the company has worked with some of the coolest partners in science and tech, from NASA to South Korean tech giant Kakao, not to mention Germany’s national aeronautics and space research center’s robot-building project. The latter is using GitHub to share its advanced robotics program as open source software.

With a client roster as diverse and interesting as one of Asia’s biggest chat apps, space rocket builders and robot engineers, the company does a good job of showing it can step with the big guns.

To say that Salesforce is going from strength to strength would be an understatement. The company has outperformed some of the IT scene’s biggest hitters this year – its stocks are increasing in price faster than the likes of Microsoft and Oracle, and it is winning more influence than ever.

Its digital marketing campaigns are high-profile and, most of all, sound cool enough to win extensive earned media coverage. The Salesforce-developed Einstein AI, for example, already sounds like it has the potential to win serious digital marketing kudos, and the likes of Adidas are already onboard.

Its latest Google partnership is another incredible coup. Joining forces with a search engine of Google’s size makes perfect sense for a cloud CRM service provider of Salesforce’s size. Together, they have the potential to personalize millions of users’ web browsing experience beyond most marketers’ dreams.

Partnerships are a strategic marketing ploy, and partnering with companies whose digital initiatives align with those of your own, is a win-win for both parties.

Digital campaigns are vital to Salesforce, who traditionally produce new product updates every four months, claiming, “No one else can update hundreds of millions of users three times a year.”

It made a name for itself with its “end of software” campaign, launched before the company was even a year old, hiring actors to stage fake protests at competitors’ sales events, and positioning itself online as a “revolutionary” force through earned media.

Ten years later, it was still referring to itself as an industry “revolutionary.”

Companies like Nestle have teamed up with Salesforce for the “Heritage” campaign, using the latter’s technology to build up consumer profiles of visitors who interacted with the campaign, with data modeling used to improve Nestle’s digital targets.

3. InVision “Position yourself as the hip new alternative to the establishment”

The original InVision app, launched when the company debuted in 2011, was intended to function as a set of pro picture editing tools that let designers add animations and transitions to websites’ and apps’ prototype designs.

But its new Studio platform is its biggest release yet, proof that it now feels ready to take on Photoshop and Sketch. The product is a comprehensive set of design tools that not only do away with conventional photo editing software, but also allow for easier collaboration via the InVison Cloud.

How do people find out about InVision’s offering? It has a robust social following, that they keep updated with fresh, timely content. Their blog is Infographics galore. And, their Inline Tweet Sharer on their blog makes it easier for users to instantly share.

InVision isn’t above content creation. In a sense, they are a creative suite. They create content that is shareable, easily to digest and catered to the people who matter the most: customers. Ignoring content marketing is one of the biggest saas mistakes, companies make.

In many senses, InVision is taking on the big guns at Adobe and Sketch. It is hitting them where it hurts – right in the paint points, and throwing down the gauntlet quite vividly in multi-lingual sponsored content pieces on high-profile sites ranging from TechCrunch to the Russian version of Computer World.

This is all part of a pretty clear digital strategy – to get the company mentioned in the same breath as its rivals, and hype up its biggest release since its inception.

Per Astana, InVision’s marketing strategy is to remain committed to design, provide plentiful educative contents and maintain feature focus, as well as beta review its efforts prior to going live.

In addition to its familiar survey tools, SurveyMonkey has also made a name for itself in the word of analysis. They offer sample selection, bias elimination and data representation tools all available in different languages. Although it has paid and free versions, its B2B services are where it hopes to make serious inroads. Their Benchmarks product allow users to compare their survey results against those of its rivals.

SurveyMonkey’s digital strategy is evident in its acquisition and partnership efforts. It has snapped up the likes of form building tool Wufoo, essentially bought out a rival in Fluidware (makers of FluidSurveys) and signed deals with Salesforce and marketing automation software giant Marketo.

If your SaaS company is a tool multiple demographics can utilize, cater to them in their language. Literally.

You can now access SurveyMonkey in multiple languages, and becoming a powerful multi-lingual force has been the company’s goal right from the get-go. By 2011, the company was providing its services in 13 languages, a figure that now stands at 16. Despite being an American company, it claims United States users make up just 55 percent of its client base – and is aiming to whittle that number down to 25 percent.

This provides a great digital model to follow. If you integrate non-native languages in your offering early on, it will probably cost you relatively little to do so. But trying to do so retroactively, when your product is already complicated can become daunting – not to mention very hard to get right.

What’s more, SurveyMonkey offers extensive multi-lingual survey options. This means that multinational clients are more likely to use its services than its more limited, mono-lingual rivals.

Carbon Black’s rise to the near-summit of the security software game has been nothing short of meteoric. They overcame an embarrassing hack in 2013, where malware distributors broke into the network to copy a private certificate signing key.

Indeed, last year it flexed its financial muscles with the ambitious US $100 million purchase of Confer Technologies, a next-gen antivirus provider.

Like SurveyMonkey, Carbon Black has partnerships with both Marketo and Salesforce. They leverage these partnerships to create lead scoring initiatives and mine new prospects. It also runs educational webinars to complement its traditional marketing activities — this year included a 100-city world tour.

If you want people to care about your brand, you have to educate them on your brand. Video is king and webinars are a great way to bridge the gap between video and educational meets entertaining.

Carbon Black has a good social media presence. It keeps things fresh by running an active blog, with a daily news digest and webinar updates.

But, being a security company, it can leverage the fear factor, so to speak. That’s why they run threat analyses on the latest high-profile malware.

Webinars are a great way for businesses to project messages to a large audience from the comfort of their own computer. As no company can afford to neglect security, distributing a webinar about a headline-grabbing piece of ransomware is a great way to catch a client’s attention. This is a strategy that Carbon Black has run time and again – to great effect.

You can be the SurveyMonkey’s and Salesforce of your field too. It doesn’t matter what your SaaS company is, but the key is getting people to care about it. From contests to blog content, keeping your digital marketing strategy fresh, timely and consumer-centric will take you a long way.